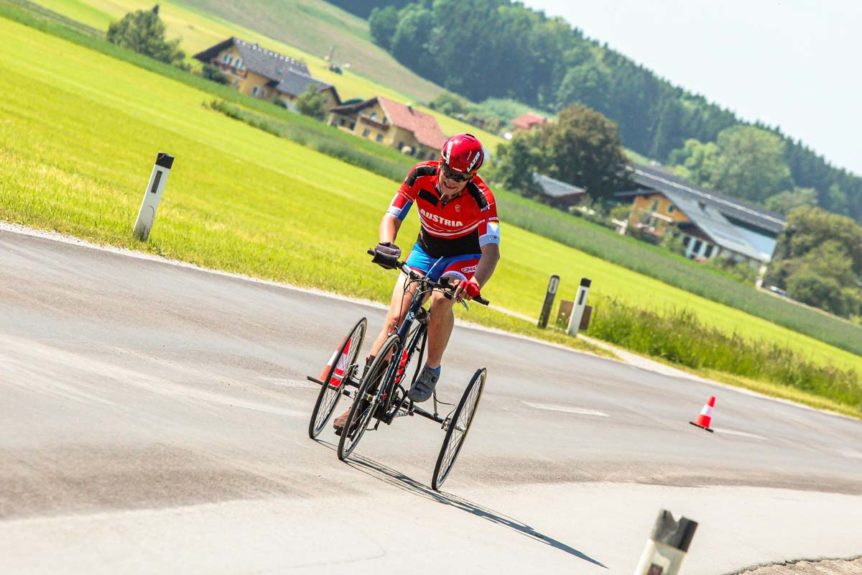 After a serious accident at the age of 18, Christoph Dieminger from Wolfsbach had to learn everything all over again. In the meantime, the 31-year-old covers more than 12,000 kilometers a year on his tricycle despite a hemiplegia. It has given him back his freedom and courage to face life. At the Sparkasse UEC Paracycling European Championships presented by Lenzing AG from May 25 to 29, 2022 in Upper Austria, Christoph Dieminger wants to win his first medal.

In 2008, Christoph Dieminger’s life was suddenly turned upside down. In a car accident, the Wolfsbacher (district Amstetten) was seriously injured. After ten weeks in a deep sleep, the diagnosis of hemiplegia followed. “I was a real wreck. After eight surgeries I had to completely relearn everything. At that point, there was absolutely no thought that I would ever be as athletic as I am now,” Christoph Dieminger recalls.

The hard road back
More than two years of rehabilitation followed before he was ready to find his way in everyday life again. Due to his disability, he was unfortunately no longer able to work and so new goals had to be set. He discovered his love for cycling. At first he rode an electric bike, but eventually he bought his own tricycle without drive assistance. He had to dig deep into his pocket to finance it, but it was worth it to the Wolfsbacher. “Cycling has given me back my freedom. I can go anywhere with it, and under my own power. It’s exhausting, of course, but that’s the way I want it. I have achieved so much through cycling, including getting my driver’s license back,” says a proud Christoph Dieminger. For three years now, he has also been driving his own car again, another important step towards independence.

Conquering the Großglockner
During the last two years, which were dominated by COVID-19, Christoph Dieminger worked a lot on his endurance. Last year, the paracycling athlete rode 200 kilometers at a stretch for the first time. An achievement he is very proud of. “Last year, the stage on the Großglockner High Alpine Road was also a very special challenge. For my birthday, I completed the approximately 13 kilometers with more than 1,200 meters of altitude,” says Dieminger. The Wolfsbach native spends an average of 12 to 14 hours a week on his bike, plus about two hours of weight training. This adds up to a remarkable 12,000 to 13,000 kilometers a year.

Medal in Upper Austria in his sights
The 31-year-old is now particularly looking forward to the Sparkasse UEC Paracycling European Championships presented by Lenzing AG from May 25 to 29, 2022 in Upper Austria. Christoph Dieminger already took part in last year’s premiere. Due to his new classification and the change to a different classification class, he reckons he has good chances for the home European Championships. “It’s really great to have such a great international event virtually on your doorstep. I will definitely give my best and hope that I can win a medal,” Dieminger looks forward to the European Championships with confidence.

You can find out more about which cookies we are using or switch them off in settings.

This website uses cookies so that we can provide you with the best user experience possible. Cookie information is stored in your browser and performs functions such as recognising you when you return to our website and helping our team to understand which sections of the website you find most interesting and useful.

Strictly Necessary Cookie should be enabled at all times so that we can save your preferences for cookie settings.

If you disable this cookie, we will not be able to save your preferences. This means that every time you visit this website you will need to enable or disable cookies again.

This website uses Google Analytics to collect anonymous information such as the number of visitors to the site, and the most popular pages.

Please enable Strictly Necessary Cookies first so that we can save your preferences!