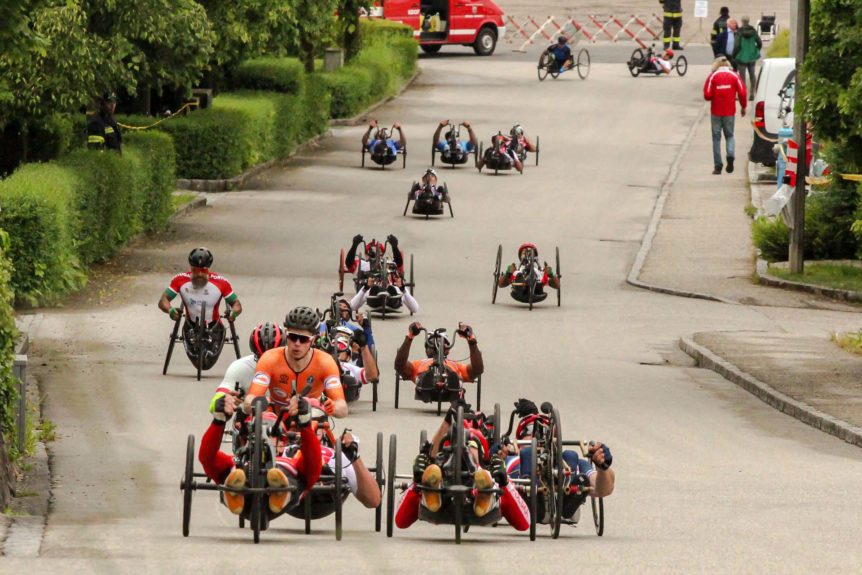 European Paracycling Championships and UAC Tour from May 25 to 29, 2022

After the successful premiere of the European Paracycling Championships last year, the best Paracycling athletes in Europe will be in Upper Austria from May 25 to 29, 2022. They will give their all at five different locations in order to win the coveted titles and medals. At the same time, this great inclusion event will see the participants of the Upper Austria Cycling Tour fight stage by stage for the leader’s jerseys and the overall tour victory. This is a perfect stage for disabled sports as well as for popular sports.

This year will be only the second time that a Paralympics European Championship will be held, and the second time that it will take place in Upper Austria. Walter Mayrhuber and his team have already shown at the premiere last year that despite the special challenges due to Corona, they have put together a great event. More than 140 Paracycling athletes from 17 nations competed for the coveted European Championship titles in June last year. The performance of the Austrian team was also very pleasing, winning three gold medals and a total of nine medals. The Upper Austrian local hero Walter Ablinger and the two Styrians Thomas Frühwirth and Franz-Josef Lässer were crowned European champion. “One of the focal points of our event has been inclusion from the very beginning. It is a very special that physically impaired and non-impaired athletes can practice the sport together,” said the organizer.

Established stage locations and innovations
And so this year the second Sparkasse UEC Paracycling European Championships presented by Lenzing will take place from May 25 to 29, 2022. Women and men will compete in all 13 racing classes for the titles in the road race and individual time trial. The performance classes will be differentiated by category and range from road cyclists (C1-C5) and hand bikes (H1-H5) to tandems (B) and tricycles (T1, T2). The team around organizer Walter Mayrhuber works with high pressure on the preparations for the international event. So there are some innovations again this year. This year, for the first time, the event will be held over five days and starts on May 25, 2022 in the evening with the Team Relay in Gallspach. Here the handbikers will compete in national teams of three for victory. In addition to the already established stage locations Schwanenstadt, Lochen am See and Peuerbach, a second new location could also be won with Altenhof/Gaspoltshofen.

“We are particularly pleased to be able to welcome Europe’s best Paracycling athletes to Sportland Upper Austria. With this we can once again show that disabled sports are a special concern for us. A big thank you to Walter Mayrhuber and his many helpers. They all make this event a unique inclusion event”, says Upper Austria’s Regional Minister for Economics and Sports Markus Achleitner.

The UEC (Union Européenne de Cyclisme – European Cycling Union) and the organizing team expect an increase compared to last year. Around 200 to 250 athletes from Europe are expected this year at the UEC Paracycling European Championships 2022.

Battle for overall victory at the Upper Austria Cycling Tour
On almost identical routes, cyclists of different age groups fight for the overall victory at the Upper Austria Cycling Tour. On the five consecutive days, the athletes cover almost 330 kilometers with over with over 3,500 meters of altitude on the varied routes in the Inn and Hausruckviertel. back. Each stage location has its own charm. The requirements for participation in the Upper Austria Tour are an amateur license, Masters license or an ÖRV BikeCARD as well as a racing bike. In addition to the overall leaders, this year for the first time also the leaders in the Masters classes as well as BikeCARD holders can look forward to UAC Tour jerseys.
“In the first years it was possible for the amateur athletes to compete in individual events, but since last year it has become a real tour. Last year, it has become a real tour. Due to Corona, only 80 athletes could be admitted to the UAC Tour 2021. athletes could be admitted. This year we want to triple the number of participants,” is the goal of Walter Mayrhuber.

A Festival of Cordiality
Not only the top performances are in the center of attention at the big event in Upper Austria, but above all the joy of sport and movement. The aim is to motivate as many people as possible to take part in sports. The aim of the event is now also to join forces with the population in the individual host cities to celebrate a festival of joy. “Every athlete deserves the applause. The laughter and conversations with the participants, who are in the middle of society, compensate for everything. We look forward to a festival of cordiality in 2022,” says Walter Mayrhuber, looking confidently ahead to the Inclusion event.

You can find out more about which cookies we are using or switch them off in settings.

This website uses cookies so that we can provide you with the best user experience possible. Cookie information is stored in your browser and performs functions such as recognising you when you return to our website and helping our team to understand which sections of the website you find most interesting and useful.

Strictly Necessary Cookie should be enabled at all times so that we can save your preferences for cookie settings.

If you disable this cookie, we will not be able to save your preferences. This means that every time you visit this website you will need to enable or disable cookies again.

This website uses Google Analytics to collect anonymous information such as the number of visitors to the site, and the most popular pages.

Please enable Strictly Necessary Cookies first so that we can save your preferences!